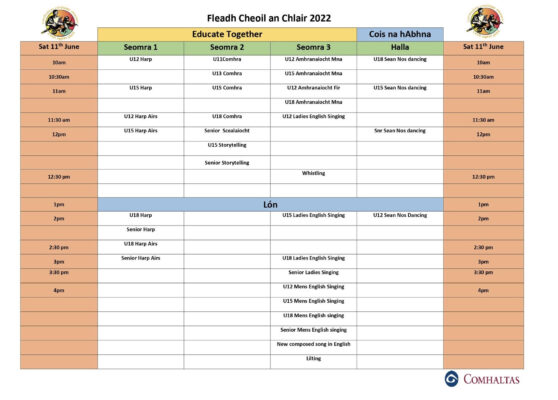 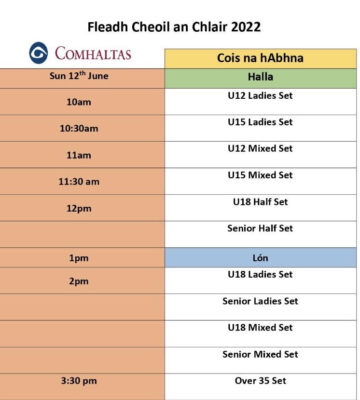 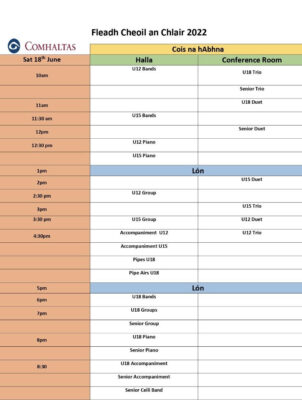 Under 9 competitions will take place in the Autumn

The Annual General Meeting of Clare County Board of Comhaltas Ceoltoiri Eireann took place on Monday November 8th 2022. The following officers were elected. 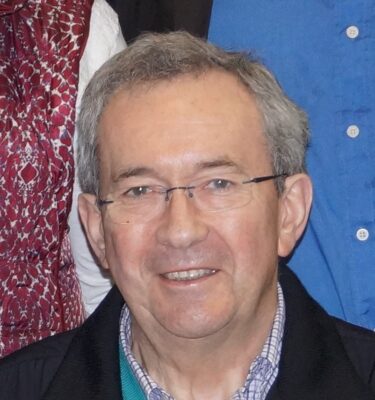 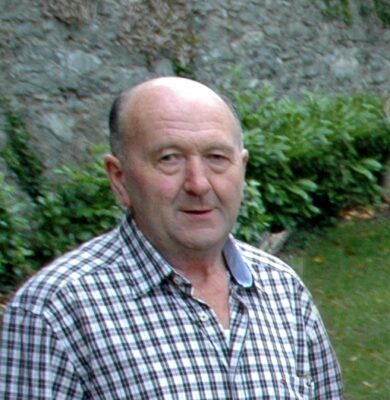 It is with great sadness that Clare Comhaltas announce the death of Pat Liddy RIP.
Pat was one of six children Dan, Séamus, Pat, Cyril, Attracta and Peggy, his parents were farmers and their home at Lislea, Newmarket-on Fergus was a house full of music, singing and dancing. The Liddy family name is synonymous with Comhaltas and with traditional music in general. Pat devoted his life to promoting Comhaltas Ceoltóirí Éireann, in the 1960s he helped set up a number of branches throughout the county. He was passionate about set dancing and with his wife Nora they ran the hugely successful Cine Rínce set dancing club at Cois na hAbhna for many years. Pat was an excellent set dancing tutor and he was a fixture at Scoil Fleadh Nua, he also adjudicated at Fleadh Cheoil na hÉireann for many years. Apart from set dancing Pat loved singing and heattended many of the singing clubs in Co. Clare and bey ond. His long time friend and neighbour Robbie McMahon held his “First Friday” sessions at Duggan’s pub in Spancilhill where Pat was a regular visitor. In 2002 Pat organised a tribute weekend to Robbie which was a huge success, and in 2010 Cois na hAbhna Archive made a documentary film on Robbie’s singing career in which Pat
featured. In November 1973 he convened the first meeting between the Clare Co. Board of Comhaltas and
Head Office officials when the decision was made to move Fleadh Nua from Dublin to Ennis on a permanent basis from 1974.
Pat was chairman of Fleadh Cheoil na hÉireann in 1977 when it returned to Ennis after a gap of 21 years, the proceeds of which were the initial funding of the Cois na hAbhna building fund. He was a constant presence in Cois na hAbhna from the day the first sod of the foundation was turned on the 30th July 1979, one of the original five Cois na hAbhna trustees, his memorable fundraising schemes resulted in Cois na hAbhna being debt free by the end of 1984. In recent times Pat’s fundraising ability was once again to the fore when he launched a very successful patronage scheme to raise much needed funds for essential repairs to the building. Pat published his history of Cois na hAbhna in 2016 during Fleadh Cheoil na hÉireann in Ennis, it chronicles the growth of Comhaltas in Co. Clare from its beginning in 1954 as well as the development of a landmark Cultural Centre Cois na hAbhna, a long held dream of his friend and colleague the late Seán Reid, who sadly passed away before it was completed. This book will form part of Pat’s vast legacy to the organisation he loved, Comhaltas Ceoltóirí Éireann. The book is available from Cois na hAbhna. In 2006 Cois na hAbhna was redeveloped with the support of State funding, a new management board was put in place by Comhaltas HQ, where Pat served as treasurer realising his life long dream of a fully functional and self-financing state of the art cultural centre.
Our sincere sympathies to his wife Nora, Children Gearóid, Cathal and Triona, grand children and extended family.
Solas agus suaimhneas, na bhlaitheas ar a anam dílis

A Christmas message from the home County.

The link’s to the videos : 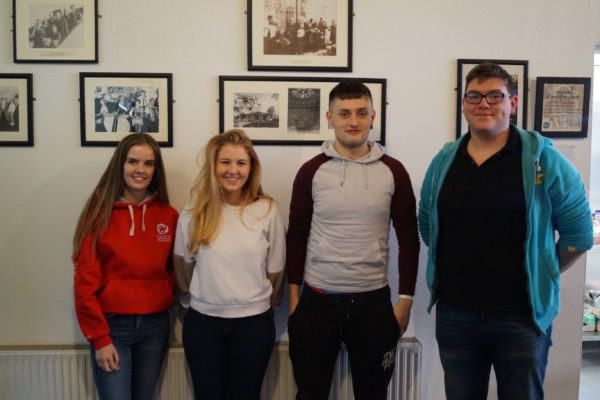 Ceol an Gheimhridh has been cancelled.

Sailbheaster MacConmhaigh 1895-1980. A Native of Lissycasey, Sailbheastae was Uachtarain Comhlatas Ceoltoiri Eireann from 1961 to 1964 and Cathaoirleach Comhairle na Mumhan CCE from 1966 to 1970. Inis Cathaigh CCE erected the Stone in conjunction with Fleadh Cheoil na Mumhan 2019. 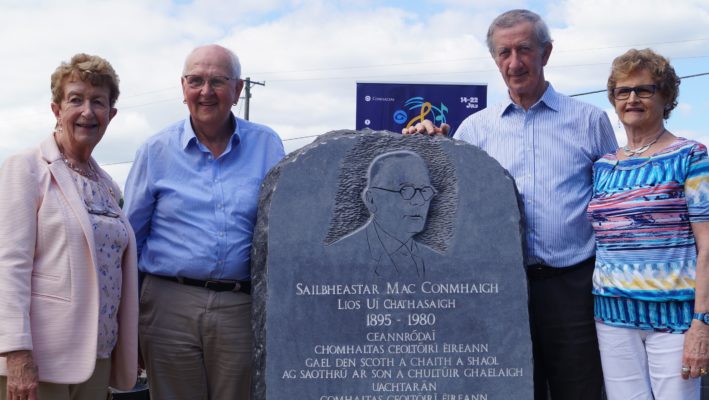 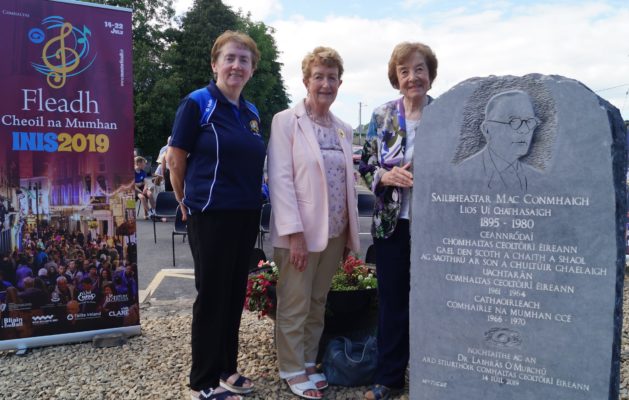 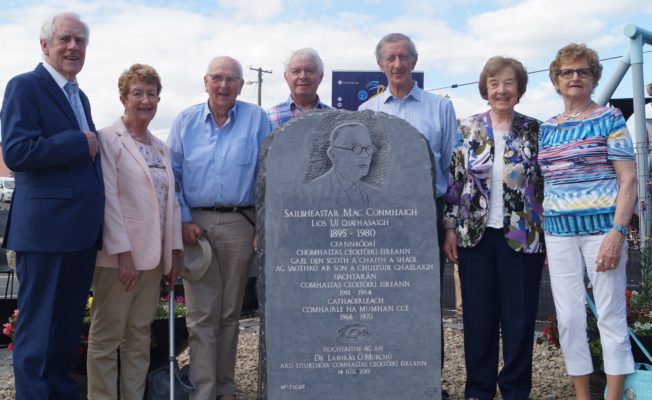 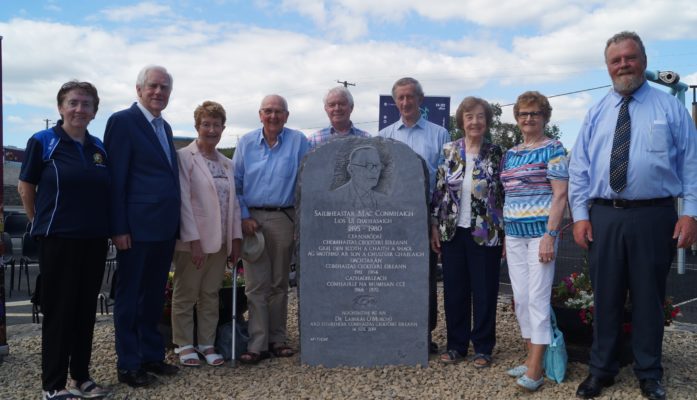